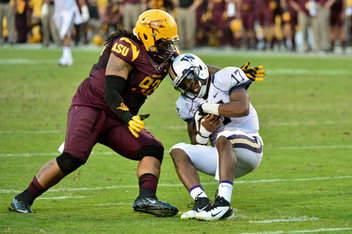 Demetrius Cherry, a junior defensive end at Arizona State, has been arrested for misdemeanor DUI after he was stopped near University Drive and South McAllister Avenue, according to recent reports. A test was performed to determine his blood alcohol content, but the results have not yet been released. Cherry was started as defensive end by Coach Todd Graham against Stanford and Washington. His performance led everyone to believe that he had great potential. In seven games, Cherry has made 12 tackles. Now, it is questionable if Cherry will play in the Notre Dame game scheduled for Saturday.

While monetary penalties and jail time are things that no one wants to face, an Arizona DUI can have implications that reach even farther than that. For example, an Arizona DUI can affect your job or school prospects. In this case, if Cherry is found guilty of DUI, it is possible that it could affect his future football career. Similarly, some people are denied jobs because of a DUI conviction. Because of this, it is very important to minimize the repercussion of any DUI, including a first-time offense. While it may seem logical to simply plead to your first DUI and take minimal consequences, this can have a long-lasting effect on the rest of your life.

DUI is a very grave charge and you should take it seriously. Do not simply plead guilty; instead, explore your options and make a choice based on what is best for both the present and the future. While it may be tempting to simply plead guilty and put this behind you, remember that what you do today could have a lasting effect upon your future, even years down the road. The Oswalt Law Group in Phoenix is ready to help you with your DUI charge. We have years of experience in helping those who have been charged with DUI fight their cases in court. We may be able to help you reduce your charges or mitigate the damage that a conviction can bring into your life. Whether this is your first DUI charge or you have earlier convictions, it is important to handle these serious charges correctly. Contact the Oswalt Law Group in Phoenix today and learn more about how we can help.