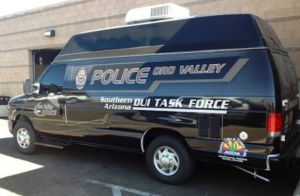 Two Arizona police departments are gearing up to spend some grant money that they have received in order to reduce the number of DUI incidents in their jurisdiction.  According to recent reports, the Oro Valley Police Department and the Pima County Sheriff’s Department have both received funds that will allow them to purchase necessary items to help in their efforts to prevent drunk driving. Oro Valley PD Purchases Blood Test Van The Oro Valley Police Department recently used a Governor’s Office of Highway Safety grant to purchase a Chevy Tahoe that will be used as a “phlebotomy van.”  This vehicle will carry everything needed to perform on-the-spot blood testing on suspected drunk drivers. The $119,000 van will be deployed as part of the Southern Arizona DUI Task Force and will support regional police departments in saturation patrols, DUI checkpoints and other efforts to identify drunk drivers. Arizona law allows officers to take blood from any driver suspected of driving under the influence of drugs or alcohol.  Refusal to submit to the test can result in even tougher punishments for the suspected driver than the initial DUI. Pima County SD Purchases Checkpoint Trailer Meanwhile, the Pima County Sheriff’s Department used its grant money to buy a trailer to be used for transporting equipment for DUI checkpoints.  This trailer has graphics that provide constant reminders to the public about DUI safety and will carry cones, signage and other equipment to and from these checkpoints. DUI checkpoints are one method that is used consistently throughout Arizona to identify drunk drivers and make DUI arrests.  Despite the fact that controversy surrounds not only the legality of DUI roadblocks but also their effectiveness in catching drunk drivers, Arizona police continue to use these methods frequently, particularly around holidays during which the number of drunk drivers on the road tends to go up. If you are arrested or charged with DUI as the result of a checkpoint or are forced to give a blood sample, it is important for you to talk immediately to a DUI defense attorney.  Many people do not realize that they have rights in these situations that should not be infringed by police departments.  A DUI defense attorney may be able to help you negotiate a plea agreement or even have the charges dismissed, depending on the circumstances, and can help you mitigate the consequences of a DUI charge.