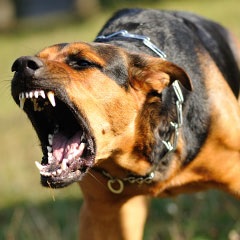 Dogs Sinking Their Teeth Into Arizonians

Did you know that Arizona dog owners pay $20,000 more than the national average when their pets bite someone? One possible reason is that dogs and people are increasingly crowded together in expanding urban areas like Phoenix.

On average, dog owners in the Grand Canyon state – or their insurance providers – fork over $57,000 if their pet bites someone else. Interestingly, the actual number of claims for dog injuries has decreased more than 9% over the last 12 years while the associated costs with the bites has risen 94% to $571 million. When you factor in associated costs, it’s easier to see why the costs have jumped so much. For example, when a postal worker is bitten, an insurer is required to pay double the costs: one for the victim and the cost of a replacement carrier to cover the victim’s route. Also factored in is the cost to hospitals. Injuries from dog bites treated that require treatment from a hospital results in $55 million annually. One-third of that is covered by Medicaid. Trips to the hospital after a dog bite jumped 139% from 2008 – 2012, with many victims requiring a series of painful rabies shots. Plastic surgeons and trauma doctors have also been in high demand for treating such injuries.

From the time you’re bitten by someone else’s animal, you have two (2) years to file a personal injury suit. As for the owner’s responsibilities, they are held liable even if they are unaware of the animal’s location when the injury occurred. Also, even if the animal has never before shown a tendency to bite or attack, the owner is still liable. The sole exception is if you provoked the animal or were trespassing at the time of the attack.

Call The Oswalt Group if You’ve Been Bitten

If you’ve been injured by someone else’s pet, you may entitled to compensation, which can go a long ways towards helping pay any associated medical bills, lost wages, etc. Call us here at the Oswalt Group for a free consultation at 602-225-2222.