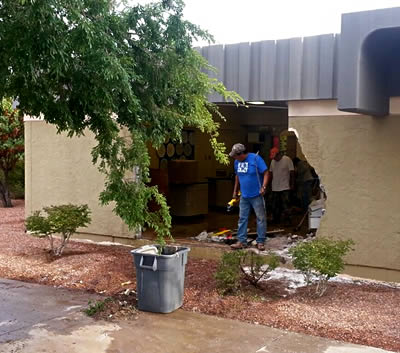 Driver Charged With DUI After Crashing Into School Building

According to recent reports, a driver was arrested after slamming into a local school building while under the influence of alcohol. Police found Edsel Young, 47, after he crashed the Chevy Suburban that he was driving into Page High School. Police report that he had a BAC of 0.223 percent, or three times over the legal limit. He sustained minor injuries. Police were notified of the incident by two women who saw Young speed through the intersection on Coppermine Road and Lake Powell Boulevard before crashing into PHS. When police came, they told the driver to get out of the car after they observed signs of him being intoxicated, which included bloodshot eyes and slurred speech patterns. He then went on to admit that he was involved in an argument with his wife and he had consumed a few cans of beer, but he refused to answer any further questions. The man staggered from side to side during a walk-and-turn test, and the test was halted due to concerns about the man’s safety after he fell down. Young caused roughly $20,000 damage to the school nine months after a fire ravaged the same building. Nobody was in the school at the time of the crash.

Driving while intoxicated can be a dangerous gamble. You may think that you are safe to drive after going to a party or bar, but the truth may be the opposite: your judgement may be impaired. It is vital that you are able to react quickly to situations on the road. The police know this and are constantly on the lookout for drunk drivers. In 2012, more than 31,000 DUI arrests were made, highlighting the severity of this problem. Arizona has a unique way of sub-categorising different DUI charges based on their severity. On top of being charged with a simple DUI, you can also be charged with an extreme DUI, which means that the driver’s blood alcohol content is over .150 percent, or super extreme DUI, which is issued when a driver has a BAC of over 0.20 percent. You may be given expensive fines as well as jail time for a DUI conviction. More importantly, however, is the effect drunk driving has on innocent victims. When a drunk driver hits and injures or kills someone else, the victim has done nothing wrong and simply suffers due to someone else’s poor choices. Furthermore, many drunk drivers are uninsured or have no current license, particularly if they have already had previous DUI convictions. If you have been injured by a drunk driver, do not hesitate to contact the Oswalt Law Firm in Phoenix. We can help you fight for your rights and recover the compensation you deserve.