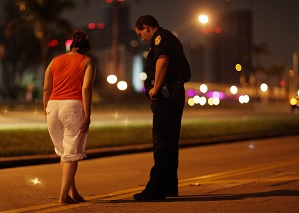 DUI? Do You Really Have To Take A Field Sobriety Test?

There no doubt about it: Arizona law is tough on drivers charged with driving under the influence (DUI). You could be jailed up to 10 days for just your first offense. But if you’re asked to take a field sobriety test by an officer, do you really have to take it?

Here in the Grand Canyon State, our police officers have implied consent; meaning that if you are arrested and the officer has reasonable grounds that you are driving under the influence, you automatically consent to some form of field sobriety test. When you applied for your Arizona driver’s license, you implied your consent to submit to testing if you were ever stopped for impaired driving.

What If I Refuse to Take The Test?

Just as the officer has the right to arrest you for DUI, you have the right to refuse the field sobriety test. It’s not a good idea to do so, mind you, but you do have the right of refusal. If you do refuse, chances are you’re not going to be happy with how things go from there. For starters, you will be ordered to immediately turn over your driver’s license to the officer – and you’ll be without it for a full year. After 90 consecutive days of the suspension, you’ll be able to request an ignition interlock license that would stay in place for the remainder of the suspension. If you refuse a test for consecutive times within seven years, your suspension will be upped to two years.

What to Do If You Refuse a Test?

Even if you refuse a field sobriety test, the officer can still arrest you for DUI. However, if you feel the officer did not have grounds to ask you take a test, you have 15 days from the date of the arrest to request a hearing with the Motor Vehicles Division.

Get Help With Your DUI

While DUI charges can have serious consequences, every case is different. To reduce – or even avoid – those consequences, you need an experienced and aggressive attorney who knows the ins and outs of Arizona DUI law on your side. If you’ve been charged with DUI, we urge you to contact the skilled lawyers at Oswalt Law Group for a free consultation.