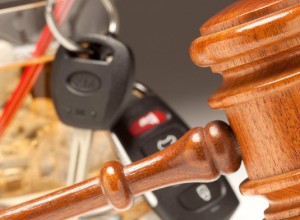 Arizona designates several different classifications of DUIs, including regular DUI, extreme DUI and super extreme DUI. The state categorizes DUIs based on the severity of the situation and the amount of alcohol the driver has consumed. Each type of charge leads to different amounts paid in fines and different amounts of jail time associated with the crime. A regular DUI is defined as driving under the influence, including being impaired to the slightest degree. Normally, a DUI is charged when the driver has a blood alcohol content of .08 percent or higher, although there are exceptions to this rule. Once a driver’s blood alcohol level climbs to .15 percent or higher, however, or if the driver causes significant property damage or injury in a drunk driving crash, or if the driver has multiple DUIs, the changes may change. Extreme DUI is defined as having a blood alcohol concentration of at least .15 percent but less than .20 percent.  In order to charge the driver with extreme DUI, law enforcement must be able to show that the driver had this BAC within two hours of driving. An extreme DUI may lead to a sentence of 30 days in jail. It also carries a fine of $250 dollars plus $1,000 for the Prison Construction and Operations Fund and $1000 more to the Public Safety Equipment Fund, as well as other possible fees. The next classification is the super extreme DUI. This is defined by having a blood alcohol concentration of .20 percent or more. This type of DUI may carry a 45-day jail sentence. The fine will be $500 along with the other fees and fines associated with extreme DUI. The driver may also have to perform community service.

Is It Worth It To Hire An Attorney?

DUIs have many consequences. Besides fees, fines and jail time, the driver’s insurance rates will go up considerably. The driver may be required to install a certified ignition interlock device for over a year after getting driving privileges back. Some people wonder if they should add to the expense of a DUI by paying an attorney. Rather than look at the cost of an attorney, these drivers might be better served to wonder how much more their DUI will cost without one. In some cases, attorneys can help drivers significantly lower the overall cost of a DUI. If you have been charged with a DUI, call the Oswalt Law Group in Phoenix, Arizona. Oswalt attorneys are experienced in handling DUI cases and can often provide help that will reduce the cost and inconvenience of your DUI.