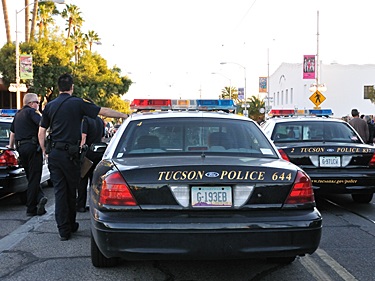 The state license of five Tucson police officers were compromised recently as a result of convictions for criminal activity, according to a recent report. The Arizona Peace Officer Standards and Training Board allowed two police officers to voluntarily turn in their license, revoked two others and suspended a fifth. Under Arizona law, the board can suspend or revoke the status of any officer who is convicted of criminal activity if it deems that the officer’s conduct could place the public in danger or jeopardize the trust the populace has in the police force. Two former Tucson police officers were convicted last year of serious crimes and had their licenses revoked by the board. Former officer Kyle McCartin was convicted of aggravated assault in connection with an alleged armed robbery, and former officer Martin Ward was arrested and convicted for sexual exploitation of a child. He is currently serving a prison term in connection with that crime. Two other former officers gave consent agreements and voluntarily turned in their licenses. John Hill, who was accused of improperly using a police database to look up dancers at a night club, and Daniel Verdugo, who gave false information on his job application, are permanently barred from working as peace officers in Arizona. John Tynes of the Patagonia Police Department also had his license suspended for DUI and other charges from October 2012.

Police Are People, Too

It is increasingly clear that police officers can make the same mistakes as the general population. The difference is that police officers are often held to a much higher standard by their employers and the public than other people are.While this may not seem fair to some, the fact is that police officers must engage in fair and right-minded conduct or they can endanger many people. Furthermore, one of the critical requirements for a police officer is that he or she be able to make good judgments quickly and under pressure. If an officer shows that he or she lacks judgment, it can be very dangerous for innocent bystanders. Because the criminal justice system seeks to find the answers to some of mankind’s toughest questions, those who enforce the law must be held to these high standards. However, when police officers are accused of a crime, they are entitled to the same basic considerations and rights as anyone else. Oswalt Law Group is ready to help those who have been accused of any crimes, whether they are police officers or civilians. Contact Oswalt Law Group today for information on how to defend your rights in a criminal case.