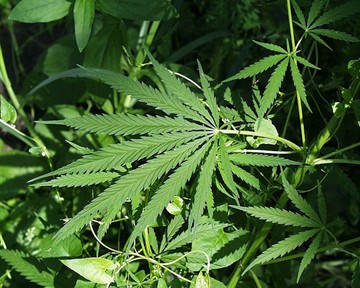 A couple was arrested when police discovered they were transporting 34 marijuana plants in their RV, according to recent reports. Flagstaff police reported that they received a call that a man and woman with a baby were arguing loudly in the parking lot of the east Flagstaff Walmart. Fearing a domestic dispute, police arrived to find the couple sitting inside the RV with the side door open in the parking lot of a nearby Denny’s. When the officer approached the couple, they began screaming at each other and at the officer. They claimed that they had argued over two hitchhikers whom they had picked up and who had not paid for gas. The officer arrested the male when he allegedly became confrontational. Upon entering the RV, the officer noticed dozens of marijuana plants in plain view on shelves and counters and in the sink. After some confusion, during which the male became very agitated and violent, both John Aaron Baker, 33, and Jessica Debois, 32, were arrested and charged with possession of marijuana as well as a variety of other charges. Is My Home Really My Castle? The Constitution of the United States, as well as the Constitutions of each of the individual states, prohibit random searches of private residences. A residence can be a home, apartment, or even a hotel room in some cases. RVs are often classified as homes if they are used as a place to live. Under the law, the police do not have a right to simply enter your home, search for evidence to use against you or make an arrest. However, they can enter a private domicile if they are given permission by the owner or if they have probable cause to suspect a crime is being committed or that someone is in imminent danger. In other cases, the police must secure a search warrant before entering the premises. If they fail to do so, any evidence they collect may not be admissible in court. If you suspect that your rights have been violated, or if you have been arrested for any reason, it is important to speak to a criminal defense attorney like those at the Oswalt Law Group in Phoenix. With years of experience in helping those who have been arrested or charged with crimes, these attorneys can also help you. Contact them immediately for an appointment.