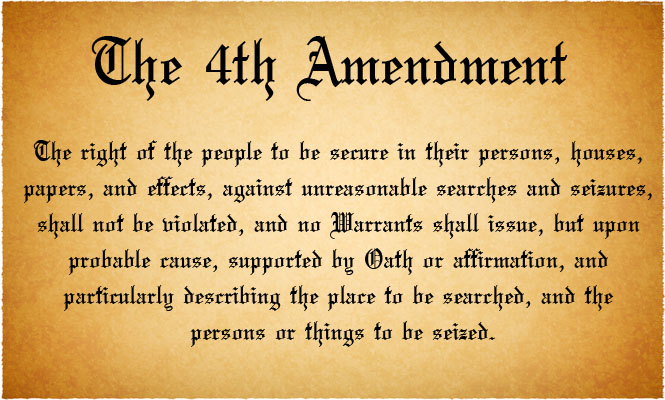 I Know My Rights! The Fourth Amendment and DUI Charges

One of the favorite things for people to say when they are arrested is, “I know my rights!”  Unfortunately, many people who believe they know their rights actually do not.  They have watched television or read things on the Internet to learn about their rights rather than consulting an attorney.  This can be a dangerous combination when someone is pulled over for DUI. The  Fourth Amendment:  What Does It Really Mean? The Fourth Amendment to the Constitution of the United States is part of the “Bill of Rights,” a set of amendments made to the Constitution almost immediately after it was written.  The Fourth Amendment is commonly referred to as the “laws against search and seizure,” although the amendment actually encompasses more than that. Many people believe that their Fourth Amendment rights are violated if an officer simply looks in their vehicle or on their person for some incriminating evidence.  However, using the Fourth Amendment as a defense is not that simple. First of all, rights under the Fourth Amendment can be used as a defense to criminal charges, but that does not mean the person will not be convicted!  Second, many people misunderstand the scope of a police officer’s ability to search personal property or the person himself or herself.  This is often according to the law established in the state where the DUI is given. Finally, while the Fourth Amendment does protect against unlawful search and seizure, police officers often have great latitude in what constitutes “probable cause.”  In Arizona, probable cause to pull a driver over can be as simple as having a broken taillight.  This may lead to a chain of events that results in a DUI arrest–all of which are perfectly legal! So What Does The Fourth Amendment Mean To Me? This does not mean that a Fourth Amendment defense is never appropriate.  In fact, a DUI attorney may elect to argue a Fourth Amendment defense, depending on the circumstances, and may end up winning the case based on these arguments.  It is impossible to predict in advance which cases will be able to successfully argue illegal search and seizure and which will not. A DUI attorney can review the facts of a case and help the driver determine if this type of defense is appropriate.  Oswalt Law Group offers aggressive DUI defenses that may help drivers escape the penalties of a DUI charge.