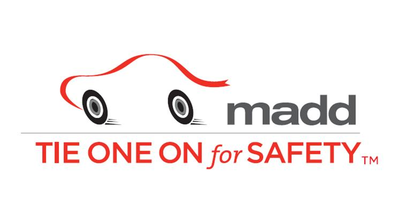 MADD Program Encourages Tying One On for Safety

Mothers Against Drunk Driving used the opportunity of holiday parties this past year to launch the “Tie One On for Safety” program.  This campaign, sponsored by Desert Car Care Centers as well as MADD, encouraged drivers to sign a pledge that they would refrain from drinking and driving during the season.  Each participant received a pledge card threaded with a red ribbon with the MADD logo and, as a special bonus, a free set of windshield wiper blades from Desert Car Care. MADD Spokeswoman Kelly Dupps says that an average of 30 people die each year from drunk driving accidents in Arizona in the 35 days between Thanksgiving and Christmas.  In 2013, more than 4,000 DUI arrests were made between November 25 and December 31. Both MADD and Desert Car Care Centers hoped that by sponsoring this pledge they would help people think before getting behind the wheel and driving while drinking and make the roads a bit safer during the busy holiday season.  Now that the holidays are over, MADD and other organizations are reviewing the data to see if their programs had the desired effect. The Truth About DUI While many people are arrested for DUI who turn out to have less than .08 percent blood alcohol content, the average BAC in an Arizona DUI arrest is .157, or almost double the legal limit.  This means that those who are arrested for DUI have a good chance of being impaired enough by alcohol to cause a serious accident and hurt themselves or others. Fortunately, there are many viable alternatives to driving while under the influence of drugs or alcohol.  The simplest and easiest to implement is to plan to stay over at a friend’s or family member’s home if you attend a party and plan to drink.  If you must drive, do not drink any alcohol at all. This is not always possible, however.  What about the people who attend work parties or other events held at restaurants?  For those who drink, a designated driver is in order.  The DD, as they are known, should drink no alcohol at all. This prevents slips in which the designated driver forgets about a drink or two, resulting in a blood alcohol reading higher than anticipated.  Many bars and restaurants will serve designated drivers with free soft drinks if they refrain from alcohol. Another option is to arrange transportation before the party.  Some employers have begun the practice of hiring a van or bus to take everyone home after a party so that no one has to risk driving drunk. For those who are faced with a DUI charge, an attorney with experience in handling these types of cases may be able to help. Oswalt Law Group reminds everyone to think about safety first and to immediately contact a DUI attorney if they are arrested for this crime.