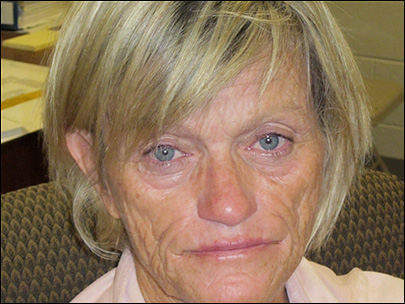 An Arizona teacher is behind bars after she allegedly drove to school drunk and continued to drink once she arrived, according to recent reports. Kathleen Jardine, 57, was said to have yelled at her students until one reported her to administrators. Jardine is a math teacher at Poston Butte High School. She is facing a count of public consumption of alcohol as well as DUI charges from an earlier incident. Students became concerned at Jardine’s behavior and alerted school officials, who called the Pinal County Sheriff’s Department. Deputies said that the woman appeared “extremely intoxicated” and arrested her. Later, school officials found a half-empty bottle of vodka, an empty single-serving white wine bottle and a half-empty orange drink bottle in her classroom. Jardine eventually admitted that she had been drinking alcohol the night before as well as that morning and during school. Her BAC was measured at .205 percent. However, she did not drive to school because her car was impounded a week earlier in Gilbert when she was cited and released for DUI. Jardine was apparently fired for being drunk in a New Mexico classroom in 2011. The Florence Unified School District has declined to comment on why Jardine was hired with this violation on her record.

In some cases, people who drink avoid a DUI charge by not driving but may be charged with public drunkenness and even disorderly conduct, depending on the circumstances. Arizona defines public drunkenness as being mentally or physically substantially impaired by the immediate effects of alcohol while in public. Cities may not make any laws that impose penalties for being a “common drunkard,” but they can pass laws regarding operating a vehicle, possession of alcohol by a minor, or for dealing with those who have threatened themselves or others. Arizona police officers are given the right to transport someone who is intoxicated to a treatment facility if the person has threatened or inflicted harm on himself or herself or on another person or is incapacitated by alcohol.   However, anyone admitted to such a center must be discharged within 24 hours of his or her request to be released. Those who are publicly drunk may also be held in a detention facility if there is no alcoholism reception center within 10 miles or if all such centers are full. However, they may only be kept for 12 hours or until released to a responsible person.

What Should I Do If I Am Arrested for Public Drunkenness?

If you have been arrested for being drunk in public, you have rights you may be able to exercise. Contact the attorneys at the Oswalt Law Group in Phoenix for immediate assistance.