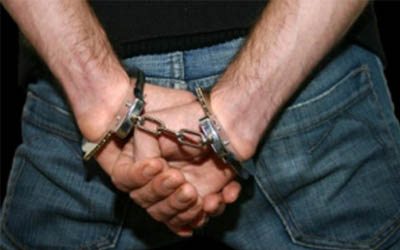 Jacob Elias Robledo, Jr., was arrested for charges on criminal damage, theft of utilities, a warrant on a petition to revoke his probation for escape in the third degree, DUI, criminal trespassing and burglary, according to recent reports. Robledo, 21, was caught squatting in a mobile home for sale and is now being held in Graham County Jail. The manager at Copper Mountain Mobile Home Park initially caught Robledo and a woman sleeping in a mobile home that was unoccupied. The manager then took a picture of the couple with her cell phone and gave it to police so they could identify the squatters. Police also found a multi-tool that had “Jacob” engraved on its handle inside the mobile home. Robledo and the woman initially fled the scene, but officers later caught up with him on foot after seeing him jumping fences and running through back yards in the surrounding neighborhood. Robledo was eventually subdued when officers threatened to use a Taser on him. The manager of the mobile home park accused Robledo of prying the door open and turning on utilities after the park had turned them off, but Robledo allegedly denied both accusations.

Trespassing can be classified three ways in Arizona: criminal trespass in the third degree, second degree and first degree. Criminal trespass in the third degree is a Class 3 misdemeanor and the least serious charge a prosecutor can make. Criminal trespass in the second degree will usually be charged if someone enters a yard or non-residential structure illegally and is a Class 2 misdemeanor. Criminal trespass in the first degree can be a felony if the person knowingly enters private property and sets it on fire, vandalizes it or commits a malicious act. Burglary can also be classified as three types: burglary in the third degree, second degree and first degree. Third-degree burglary is a Class 4 felony and is applied to cars and yards but not residential homes. Second-degree burglary happens when someone burglarizes a residential property and is a Class 3 Felony. Burglary in the first degree can be either a Class 2 or 3 felony, depending on the location in which it occurs. Burglarizing a residential home will carry a greater penalty than yards, commercial properties or vehicles. Someone can also be charged with first-degree burglary if they are in possession of a dangerous weapon while committing the crime.

How Can I Fight Burglary and Other Criminal Charges?

Burglary, trespassing and DUI charges can all have very dire consequences. The Oswalt Law Group, located in Phoenix, Arizona, has attorneys who are experienced in handling all types of criminal cases. Having a good criminal lawyer can mean the difference between serving jail time and paying thousands of dollars in fines or clearing your record and being able to move on with your life. Contact them today for more information about how to protect yourself from criminal charges.