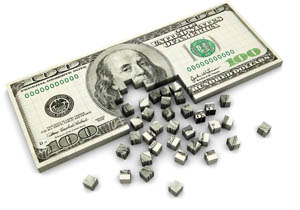 What Can My Wages Be Garnished For?

While wages can theoretically be garnished for almost any debt, these orders are most often entered when a debtor has already been through a collections process. Some garnishments, such as those for child support or back taxes, are enacted much more quickly than others. Generally, by the time a consumer debt gets to the point of wage garnishment, the debtor has had a great deal of time to consider the options. Collections efforts often start with phone calls, letters and other communications in an attempt to settle the debt. Garnishments are expensive, and creditors would rather have payments than have to go through the legal issues and procedures related to filing for a garnishment. However, make no mistake: creditors will garnish your wages eventually if you are unable to make payments on your debt.

Am I In Danger of Garnishment?

In order to be in danger of a garnishment, you must first be earning wages. Certain forms of payment, such as child support, may be immune to garnishment, as are some benefits such as public assistance. If you have a job that pays you, however, it is likely that you are in some degree vulnerable to garnishment. The attorneys at the Oswalt Law Group are here to help you. If you are facing garnishment, collections or any type of financial problem, contact us today for help. Whether or not bankruptcy is an option for you, we want to help you make an informed decision.