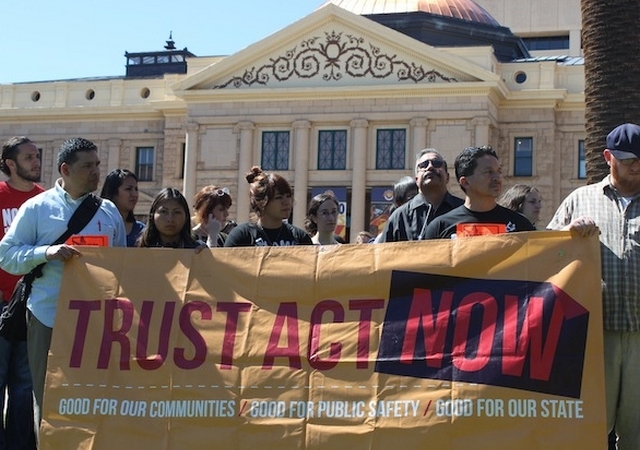 In an interesting turn of events, the state that has gained a reputation as “hate-filled” when it comes to immigration issues may now be one of the first to buck the federal government on turning over those who are subject to deportation. Representative Juan Mendez is sponsoring a bill known as the “Trust Act” that is a direct response to “Secure Communities,” the federal government’s program that targets illegal immigrants who have a conviction record. According to Immigration and Customs Enforcement, about 82 percent of the nearly 369,000 people deported last year had some form of criminal conviction, prompting the government to take action. What many people do not understand, however, is that the majority of these “criminals” are guilty only of very low-level misdemeanors, according to the bill’s sponsors. They are not hardened criminals or felons, and therefore may not present the danger to the community that ICE might imply with this release of statistics. The new bill would only allow Arizona law enforcement officials to hold those who are subject to deportation and turn them over to federal authorities if they have been convicted of a serious crime and the federal government is willing to reimburse their detention costs.

While violating immigration law is in itself a crime, the majority of people who enter the country illegally do not seem to be violent criminals. According to statistics compiled by the bill’s supporters, only 20 percent of all those deported last year were convicted of violent crimes. This leads many people to make a distinction between those who commit “paper” crimes, such as lying on an application or stating that they are in the country legally when they are not, and violent criminals who could pose a danger to the community. However, not everyone takes such a philanthropic view of the situation. Many representatives in Arizona’s legislature as well as the governor herself may not support the new bill in view of their constituent’s feelings about illegal immigration. Immigration issues and questions are difficult to answer and often spark debate among those who have varied interests in the question. However, those who ultimately suffer are often the very people these laws are designed to target: immigrants who are not violent and are trying to seek a better life but have not gone through the proper immigration channels to do so. Contact Oswalt Law Group if you have questions about criminal charges or have been accused of any type of criminal activity.