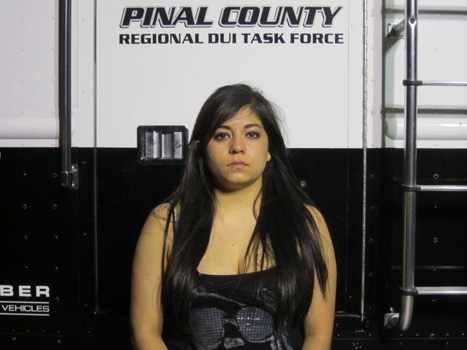 A woman was arrested after she hit a Pinal County deputy’s SUV during an arrest of another driver, according to authorities.  Amanda Leyvas, 22, was traveling north on Peart Road near Cottonwood Lane when she struck an SUV that was sitting on the side of the road with its emergency lights activated.  The deputy, Tim Gaffney, was in his vehicle at the time alone with the K9 he works with.  Two other deputies were standing next to other vehicles but were not hit. Neither the driver nor her passenger, Terry Sigarroba, 23, was injured, but the deputy and his K9 companion were both taken for medical care of minor emergencies as a precaution.  Both the driver and her passenger were said to have been drinking, and both were arrested:  Leyvas for DUI, aggravated assault and criminal damage, and Sigarroba on an outstanding warrant. Ironically, the deputies were out as part of a DUI Task Force operation.  In all, the evening’s operation netted 14 arrests for DUI-related offenses. Injury vs. Non-Injury DUI Crashes Different states have different ways of handling crashes that involve injuries and alcohol.  When a driver causes an accident that injuries someone, courts are usually content to leave the matter in the civil realm.  However, when alcohol is involved, most states allow the initial DUI charge to be amplified, sometimes to a felony.  In some states, felony DUI charges are automatic if injuries to persons are involved; in other states, additional charges, such as aggravated assault are added to the DUI. In Arizona, a felony DUI is only charged if the person has a three previous DUI convictions in the past seven years, has a child under 15 in the car at the time, or is driving on a suspended license.  If a person who is driving under the influence allegedly causes injuries, he or she may receive, instead, a separate charge known as aggravated assault. This is not necessarily an improvement, however, in terms of the eventual results of the charges.  A conviction for aggravated or felony assault can stay on your record forever and can label you as a convicted felon.  This can affect your ability to get a job and enjoy other privileges. A DUI attorney may be able to help you reduce your charges, even if your accident involved injury to another person.